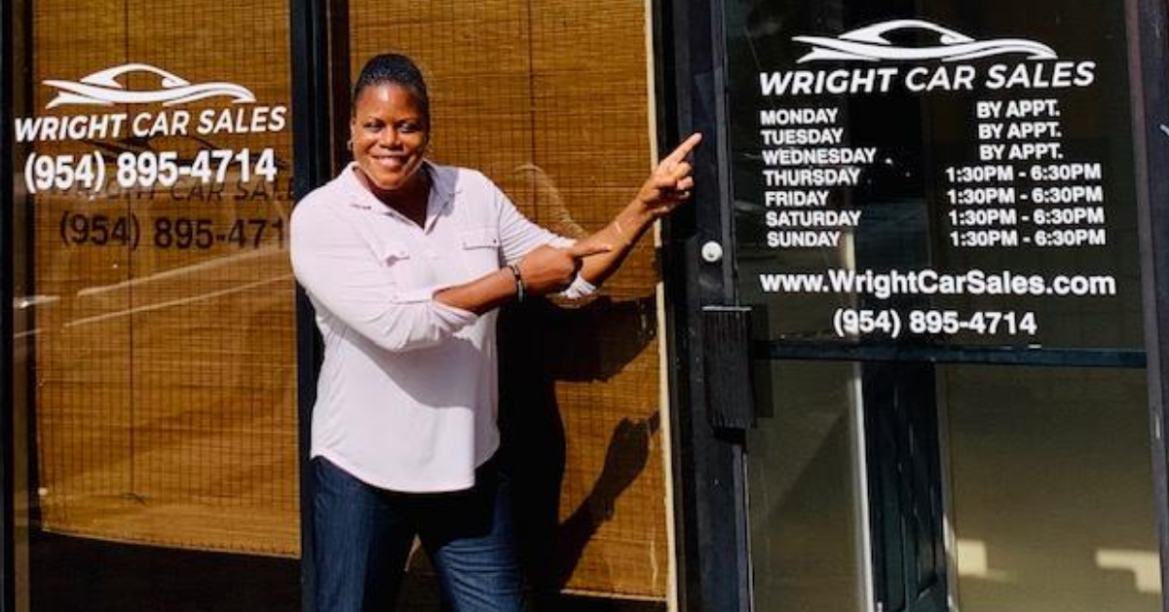 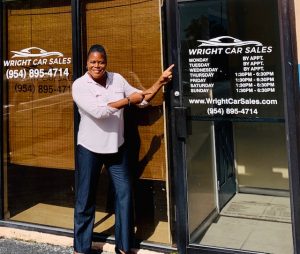 After working in long-term care for over 30 years, Angel Wright got to the point where she wasn’t enjoying what she was doing anymore. After a chance meeting with an old acquaintance, her career path went in a completely different direction, “I ran into someone I worked with in the past, who had previously owned a car dealership. He knew I wasn’t happy at my current job so he approached me with an opportunity to make some money and also learn everything I needed to know so that I would be able to sell cars. I thought I have nothing to lose, so I got my dealer’s license and we found a location to start selling vehicles at.”

Wright can clearly remember her first sale, “After I had spent hours detailing and posting pictures of a car I wanted to sell online, a customer came in and paid me cash for it. After that I was hooked, the joy of taking something and making it look brand new was something I really enjoyed doing.” After that Wright kept selling cars but she started to feel the pinch since she was using her own cash to pay for inventory and reconditioning. That’s when she looked into floor plan financing, “I reached out to a few floor plan companies before I contacted NextGear Capital and they all denied me even though I had a good credit score. So, I finally contacted NextGear Capital and I’ll never forget it because I applied for a loan on a Thursday and by Friday afternoon, I was already approved. I started buying cars the next Monday and I haven’t slowed down since.”

Even though Wright didn’t have a background in the automotive industry she had heard a lot of negativity about floor plans “I’d heard all the typical stereotypes, ‘they’re crooks’, ‘they’re loan sharks’, nothing nice. But now that I’m in it, I tell other dealers that as long as you follow the rules, you will do well. When I sell a car, I pay it off right away. I don’t like having a large balance in my account because at the end of the day, I know that the money isn’t mine and that’s how I’ve been managing my floor plan since the very beginning.”

Having a floor plan also allowed Wright to move to a bigger location in Florida’s Lake Worth area which is where her dealership Wright Car Sales resides today. “I was only able to manage 2 or 3 vehicles before getting a floor plan and after that I was averaging 8 to 10. Since I got approved for my floor plan in 2018, I’ve sold over 50 vehicles and I know I couldn’t have done that with my own cash.”

She says that she’s also learned how to set herself apart from the local competition. “The other dealerships in my area carry very similar inventory, so I like to get inventory at different price points and also models they wouldn’t carry. I love when a customer comes in and says they went to a different dealership and couldn’t find a car because they didn’t have something they could afford, or something they liked. And then they come in and I’m able to find them a car that fits their budget and is just the right amount of car they need. At least 90% of my customers are male but I love working with female customers because I know that when they come in, they’re ready to buy a car. Especially if they’re single moms who don’t have a lot of time to spare, so I do everything I can to get them into a reliable vehicle they can afford.”

Like a lot of other independent dealers, the COVID-19 pandemic has had a major impact on her business. “Before COVID I was averaging 8 to 10 vehicles and I had just gotten a new dealer license that was going to allow me to have up to 50 vehicles in my inventory, but I haven’t been able to do that because of COVID. I only have about 5 vehicles in inventory right now because the wholesale market is hot, and it’s been very difficult for me to replenish my inventory. Cars that I would typically pay $3,500 for are selling at auction now for $6,000.”

However, despite the current challenges she’s found ways to adapt to the new car buying climate created by the pandemic, “I have to think outside the box. When a customer contacts me regarding a specific vehicle, we’ll find a place to meet where they can physically see the vehicle without any obligation to buy it. I want to make sure they feel safe and I’ve also started delivering cars once they’re sold. All of my vehicles are also sanitized before customers get in them, so I’ve just learned to adapt and be more accommodating. My only regret is that I wish I would’ve bought more cars pre-COVID because the demand is there, and I know I would’ve sold them all.”

Wright also says that being a female in a male dominated industry hasn’t been a deterrent. “At all of the auctions that I go to the majority of dealers are the old school males but they’ve always been very helpful, and I don’t feel like they look down on me. If anything, they look at me with a little bit of admiration like ‘there’s a woman who knows what she’s doing!’ Being a black woman hasn’t held me back either, everyone I’ve interacted with has been very welcoming. I don’t know if this is the case for everyone, but for me I’ve never experienced any oppositions or challenges as a minority female and I encourage other women not to let the fact that they’re female hinder them from trying something that they will possibly love doing.”

She always says that her NextGear Capital Portfolio Manager, Claudia Coello has given her a lot of support, “Claudia has been my PM since the beginning, and she’s been extremely encouraging. She always tells me I’m doing it right and making her look good. We’ve built a really good rapport together over the years.”

Even with the uncertainty the past few months have provided for dealers, Wright still plans on looking to the future. “I don’t have a husband or children, so I put all of my energy into growing my business. It’s my baby! Once the market is back to normal pricing, one of my goals is to start buying inventory that’s a little newer so I don’t have to spend as much time and money on reconditioning as I do on older vehicles. I’d also like to average at least 10 to 15 vehicles on my lot and have my phone ringing off the hook.”

Now that Wright has been in business for a while, she laughs when she talks about other floor plan companies approaching her. “It’s funny because some of the floor plan companies who wouldn’t work with me when I first started out still reach out today and tell me that I’m approved for a loan with them. I take things personally and I tell them that when I needed you before you said no but NextGear Capital wanted to help me out. I can’t say anything bad about my experience with NextGear Capital. The few times I’ve needed an extension they’ve been granted to me. Their Account Portal tools like Rapid Pay and Self Reconciliation are extremely helpful too. I’ve had a good relationship with NextGear Capital from the start and I plan on sticking with them.”