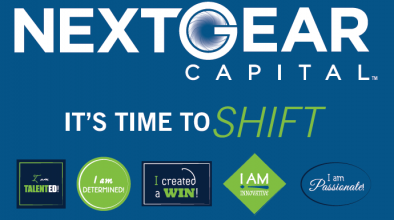 As a company, NextGear Capital has been successful from the beginning due to one thing: innovation. We have always sought to do what others may have deemed impossible. And one way we have achieved this is by tapping into the minds of our employees and giving them a voice through Time to Shift.

In October 2013, Manheim’s Right Now initiative launched at NextGear Capital as Time to Shift. And in less than two years, this program has taken our company by storm!

Time to Shift empowers employees to cultivate ideas that impact NextGear Capital in positive ways. These ideas can impact the company by increasing revenue, improving customer service or work morale, creating work flow efficiencies or eliminating unnecessary procedures. According to NextGear Capital CFO Dave Horan, it’s important for employees to have an active voice in the company.

“If we only counted on a handful of leaders to come up with ways to improve our company, things wouldn’t move as fast,” said Horan. “But when we have hundreds of people thinking of new ideas, then we can really encourage a culture of innovation and change.”

NextGear Capital has set up the idea process to promote successful collaboration. When an employee has an idea, they submit it to Time to Shift via the company’s intranet. The idea gets assigned to a member of the Time to Shift committee, or “Crew Chief,” who function as a coach to idea submitters while offering support and assistance throughout the idea process. This includes keeping an open mind and guiding the idea submitter to the right people and departments to determine if the idea is feasible.

In November 2014, NextGear Capital celebrated its 100th Time to Shift win. The momentum hasn’t slowed down either, as the company has already reached 187 wins to-date in 2015 – with 44 ideas still in progress. If the company continues at its current pace, it will exceed 200 wins by the end of the year, an extraordinary achievement not lost on NextGear Capital President Brian Geitner.

“What makes NextGear Capital successful is the incredible amount of passion, innovation, talent and determination on display by each employee every, single day,” said Geitner. “These numbers represent the sense of ownership and engagement our employees have in helping make our company an industry leader.”

Realizing the importance of not only recognizing ideas but employees themselves, NextGear Capital implemented a second phase of Time to Shift in mid-2014 – Peer Recognition. Through this added segment, employees now have the opportunity to recognize their peers displaying the traits that define the company’s culture. To date, 226 Peer Recognitions have been awarded.

“Time to Shift has been fantastic in promoting a culture where every employee is recognized as having invaluable insight into ways we can make the company thrive,” said Horan. “Not only have traditional barriers like titles and seniority been removed, but we’ve also put in place a team who is enthusiastic about helping an idea succeed from inception to implementation.” 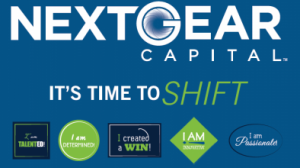